The BBC World Service carried a startling programme last week called ‘The Trouble With Condoms.’  I caught only the tail end and went looking for the full story on line. I was alarmed by what I heard:  men complaining about using condoms because ‘it’s like having a sweet with the wrapper on it!’  These men need to have their heads examined; both of them.

But it’s not only men who are not thinking straight.  One of the women on the programme admitted that she never uses a condom because ‘it slows down the passion’.  She’s a recently widowed mother who hooked up with a toy boy.  She knew that lover boy was a player so she insisted that they both get tested.  When the tests came back negative she proceeded to have unprotected sex with him on the assumption that he was probably ‘wrapping up’ when he had sex with other women! Pure folly.

Last Thursday was World Aids Day and the theme for the next five years is ‘getting to zero’:  zero new HIV infections; zero discrimination and zero AIDS related deaths.  Zero is quite a big goal, especially since there are still so many people who haven’t gotten the message that HIV/AIDS is a potentially terminal disease.

True, these days, medical treatment is so sophisticated that death is no longer the automatic outcome of infection.  The disease can be carefully controlled.  Survival rates have climbed steadily, especially in the so-called developed world.  But the cost of antiretroviral drugs is very steep. To prevent is definitely better (and cheaper) than to cure.

‘No one can cheat me’

One of the men on the BBC programme confessed that he had carelessly infected his wife.  He had been sleeping around and not using condoms.  Surprisingly, he declared that being HIV positive made him ‘more of a man’.  As he put it, ‘I became more homely and available to my family’.  Well, of course.  Who else but his wife would knowingly put up with him?  I suppose there are all those other women he could casually infect if he kept up his promiscuous behaviour!

Even more troubling was the case of the man who threatened to beat up his wife if she continued to insist on condom use.  The woman said she knew that her husband was promiscuous and that’s why she wanted him to use a condom when he was with her.  But she didn’t have the power to force him to comply.

That’s one of the big issues with the male condom.  Women are often afraid to open negotiations about its use.  But, surely, if a woman is prepared to open her legs, how hard can it be for her to open her mouth and ensure that she is protected against sexually transmitted diseases?  Especially when a woman is starting a new relationship, she needs to be confident about asking for what she wants.  Otherwise, it’s downhill all the way. And that’s not a good ride. 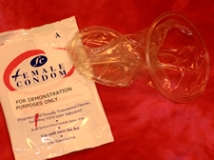 The female condom provides a welcome solution to the problem of how to protect women from infection.  The BBC programme reported the story of a female hairdresser from Uganda who offers a very valuable service to her female clients.  She supplies female condoms and gives lessons in its use.  As one of her satisfied customers says, ‘Female condom is better than the male condom.  Especially when I am using female condom, I feel I am the one who is using that.  No one can cheat me.  And I am safe.’

Lady Saw on the BBC

One of the delights of the programme was hearing Lady Saw singing just one verse of her ‘Condom’ hit:  playvideo_123.php

A condom can save yu life (men)

Use it all with yu wife (yes)

All when she huff an puff

Tell her without the condom

Yu naa do no work.

Of course, Lady Saw is not the only Jamaican artiste who warns about unsafe sex. Shabba Ranks led a successful campaign in the 1990’s and Buju Banton advised men not to be silly about their willy.  Incidentally, I just got some good news about Buju.  He has recently been transferred to a low security Federal facility in Miami.

And he sent the following message: ‘I read an article in the Jamaica Gleaner yesterday (Promoters to host Buju Banton Benefit Concert in Florida), where the guy writing the story called me a dancehall icon and said I am a sing jay. What I do is called reggae music which is way different from sing jay so you know that was an attempt to destroy my image as a reggae artist.’

The rest of Lady Saw’s ‘Condom’ song is quite perceptive. She knows that marriage is no guarantee of sexual fidelity.  So she advises both men and women to carefully navigate the dangerous waters of sexual intercourse in the age of HIV/AIDS. Playing shy can be a deadly game and looks can be terminally deceiving. New precautions become absolutely necessary:

Dem seh one man to one woman

It no matter where yu live or who yu are

Yu could be a millionaire or a superstar

We all are one

Come mek we sit down

Lady Saw warns vulnerable young women about the limp excuses irresponsible men make to avoid the use of condoms. She advocates vigilance, not just in the moment of the sex act, but more generally as a strategy for exercising control over one’s life:

Dat when dem use it

Some wi waan bust it

When dem put it on

So open yu ears an

Taking Lady Saw’s excellent advice, vigilant women need to wrap up their ‘sweety’ very carefully.  Promiscuous men shouldn’t be allowed to get even near the ‘sweety’ jar.  They simply don’t know the value of what they think they want.  And that’s the naked truth.