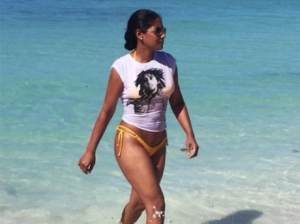 I really don’t know what all the fuss was about. The minister of youth and culture goes to the beach to cool off after the reggae marathon. She’s wearing a very youthful bikini and a very cultural tee shirt. A perfect photo op for the Jamaica Tourist Board! The minister’s son captures the image and it ends up on the Internet. And, far and wide, both old and new media dissect the meaning of this act.

Even Germany’s highly regarded political magazine, Der Spiegel, carried the story. Spiegel means mirror and Lisa Hanna’s image was held up to public scrutiny: “Debatte in Jamaika: Wie sexy darf sich eine Ministerin zeigen?” (Debate in Jamaica: How sexy may a Minister present herself?). Thanks to my friend Ellen Koehlings, co-editor of Germany’s reggae/dancehall magazine, Riddim, for that translation.

I decided to keep out of the non-debate. Then, out of the blue, a conspiracy theory came unto me like an urgent message from a gossiping angel. These were not glad tidings of great joy. The ratings of the Government are so low, Lisa’s lovely legs were let loose in cyberspace as a deliberate distraction. It was a lust for power, a plot to keep us talking about foolishness instead of important social and political issues.

Just think about it. Class prejudice has been vulgarly displayed at the West Kingston commission of enquiry. The downtown witnesses don’t always understand the uptown language of the commission. I also wonder if any soldiers and police are going to be put in the witness box to be interrogated by the public defender.

I don’t suppose the legs of Ronnie Thwaites, Bobby Pickersgill, Peter Phillips, Raymond Pryce, Fenton Ferguson and Lloyd B. Smith, for example, would have excited lust. In general, Jamaican men don’t do well as sex objects. What is good for the goose is not always good for the gander. Men expect women to be buff. But they don’t usually consider it essential to keep themselves fit.

Perhaps, Mikael Phillips, Peter Bunting, Julian Robinson and Wykeham McNeill might have stood a chance in the best-PNP-legs contest. But I don’t know if they’ve had much experience in the sex-object business. So female legs were the right choice. But whose?

I think we would all agree that it would have been far too immodest for the prime minister to parade her legs in public. And I haven’t seen the leggy attributes of Ms Denise Daley, the Hon. Natalie Neita-Headley or the Hon. Sharon Ffolkes-Abrahams. So I don’t know how well they would have stood up on the hot legs platform.

Of all the female PNP parliamentarians, Lisa Hanna obviously has the best legs. So she became the chosen vessel. That’s why the picture was posted via the ministry’s Twitter account. It was official business. As a former Miss World, Ms Hanna has had lots of experience showing off herself. Shes comfortable in the role of sex object. She knows she’s hot and she’s not afraid to blaze a fire. Lust comes with the territory.

There’s not a thing wrong with honest, old-fashioned lust. That word has a most unfortunate history. Originally, its meanings were perfectly respectable. Lust was simply desire, appetite, pleasure; sensuous appetite. A lust for life! Its the translators of the Bible who are to blame for making lust sinful.

In 17th century English, the biblical expression, lusts of the flesh, turned the pleasures of the body into something quite dirty. And it wasn’t just sexual passion. I John 2:16, King James Version, declares: “For all that is in the world, the lust of the flesh, and the lust of the eyes, and the pride of life, is not of the Father, but is of the world”.

In Fundamentalist Christian Jamaica, Lisa Hanna’s hot picture certainly excited lust of the eyes. But the passionate intensity of some of the self-righteous judges who called down damnation on her head makes me suspicious. Could it be that underneath all the apparent disgust there was actually quite a lot of pleasure in the view? 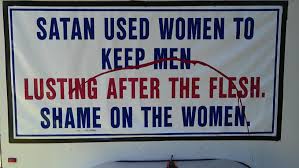 Take for instance S. Hare, whose letter to the editor was published in The Gleaner on Friday, December 26: “The saga of Lisa Hanna’s bikini is thought-provoking, and one must ask, what’s next? A picture of her posing in her lingerie going to bed”? How did Hare get from bikini to lingerie? And did the provoking thoughts stop there? Once you get to bed, the next logical step is . . .

Desire is a very slippery slope. The real issue isn’t that innocent photo. It’s the fundamental hypocrisy of those conflicted souls who both disdain and crave the lusts of the flesh. And as for that damning conspiracy theory! The Government’s sinful plot is only a short-term fix. Not a lasting pleasure!

One thought on “Lusting After Lisa’s Legs”