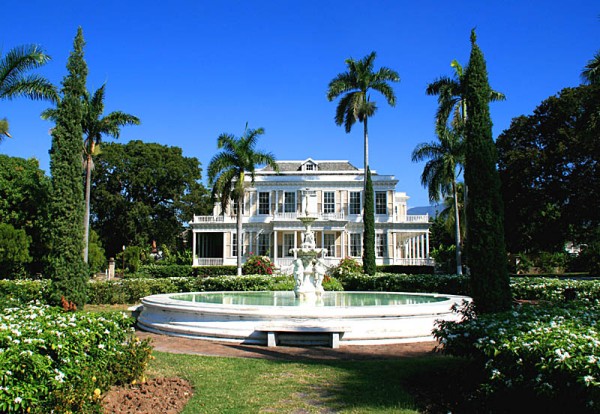 Devon House, First Home of the National Gallery of Jamaica

Why are some artists automatically given a free pass into the Biennial? And so many of them! Thirty-four invited artists entered 61 pieces. One hundred and ten artists submitted entries to be judged. Forty-nine were accepted with a total of 66 entries. If both the invited and juried artists had been restricted to one entry each, at least 44 additional juried entries might have been included.

Dr Veerle Poupeye, executive director of the National Gallery, addresses this contentious issue in her insightful ‘Introduction’ to the catalogue: “By far, the most vexing question has been whether the invited artists system should be retained, or whether the Biennial should become a fully juried or curated exhibition instead. As is to be expected, many invited artists would not like to lose their status, but others in the artistic community feel that this perpetuates undesirable hierarchies and also makes it difficult to give curatorial cohesion to the exhibition.”

In email correspondence with me, Dr Poupeye confirmed that one of the criteria used to select entries in the juried section is “practical feasibility, for instance with regards to size”. Why is this criterion selectively applied to the juried section and not to invited artists? 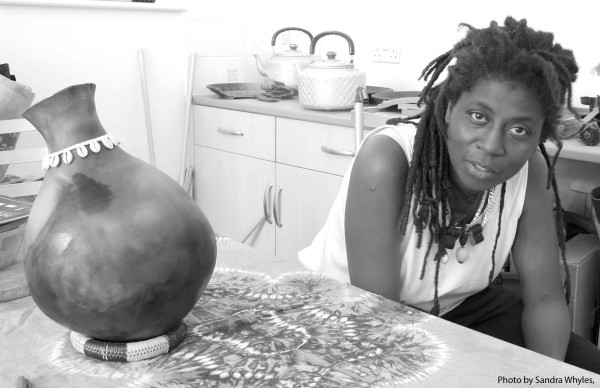 Which brings me to that hell of a drum made by invited artist Laura Facey, in collaboration with the unacknowledged international African artist Fosuwa Andoh, visual griot. Fosuwa is a textile artist and ceramic/glass crafter who came to Jamaica to direct a Prince’s School of Traditional Arts project. She established a successful pottery workshop in Rose Town. Fosuwa provided technical advice for curing the cowskin and she attached it to the body of the drum. Without her input, the artwork would be nothing but dead wood. And you know how unfulfilling that can be!

Decorated in the red, white and blue of imperial flags, Facey’s drum seems to embody colonialist fantasies: “I made the drum so that we may talk to our ancestors and bring more peace and reconciliation into our lives.” But the scale of the drum is far beyond human proportions. Our African ancestors would not recognise it as an instrument of communication. This monstrous drum has shock value, and that’s about it.

And it was quite a production to get the drum into the Gallery. According to a Gleaner article published two Sundays ago, “The two sections of the entrance door were completely removed”. In addition, “a glass partition, mounted on a concrete wall, and which separates the lobby from the drum’s temporary resting spot, also had to be taken out”. How practical and feasible was that? 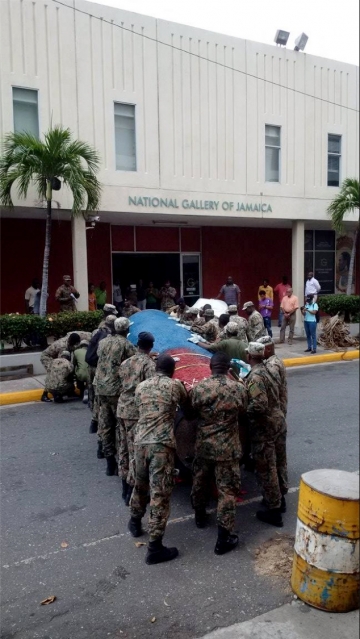 Then, “with the effort of 37 Jamaica Defence Force soldiers, the drum was slowly brought into the space. The lifting and pushing of the drum itself brought some entertainment to onlookers as the instructor raised and lowered his voice, army-style, in giving directions to the able-bodied men”. Was this regular JDF work? Or was it a roast?

The 30-foot drum sounds much smaller in metres: only 9.144. But, however you measure it, that’s a lot of space in a relatively small gallery. The drum dominates the main exhibition hall, leaving little room to view the exhibits on the adjacent walls. How many more juried entries might have been able to fit in that space, I wonder?  And Ms Facey has two more pieces in the exhibition at Devon House!

As soon as I stepped into the main gallery, a well-known artist said I looked like a work of art and I should just stand there and let people walk around me. I had a good laugh. This was my cue. I gleefully told her I was making a subversive fashion statement. 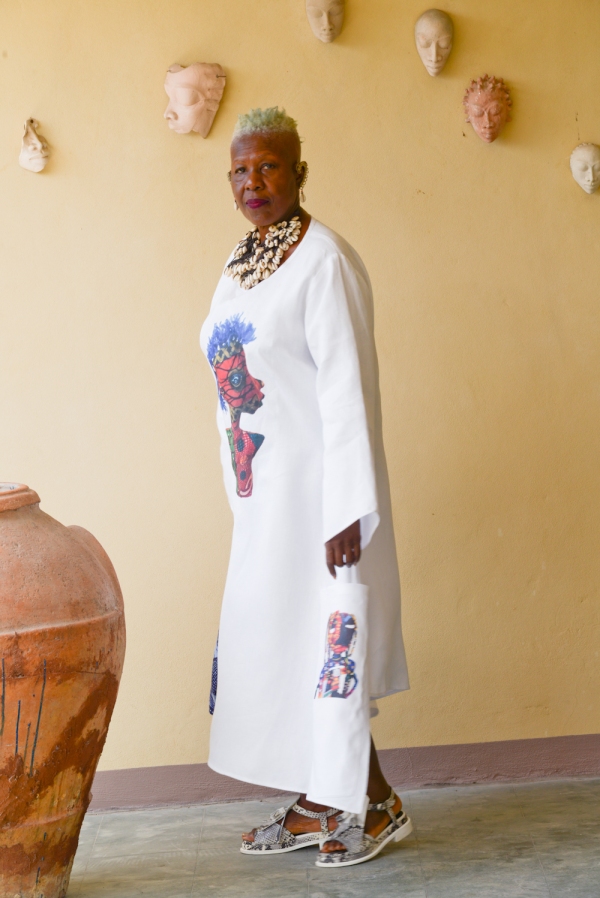 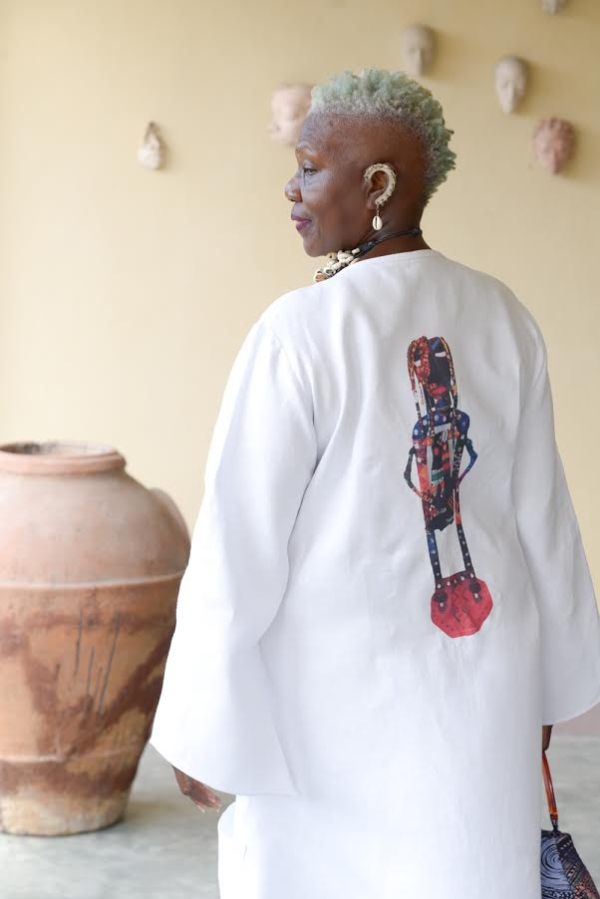 Images of the work of one of my favourite artists were printed on my dress – thanks to graphic designer Rodane Gordon at Hot Off The Press who did an excellent job! The artist had submitted two entries to the Biennial and both had been rejected. But I made sure the beautiful work was at the exhibition, if not in it. The artist I was chatting with completely understood my visual statement. Her work had also been rejected.

I’ve decided to curate a Digital Jamaica Exhibition. I’m inviting the 61 artists whose work was rejected by the Biennial jury. I also welcome those artists who were not included in the invited category. Well, I’m not actually curating. It’s an open-entry exhibition. Whosoever will may come. I’ll let the viewers decide on the value of the work.

I’ve secured the services of an internationally recognised art blogger who will design the website. I know some of the rejected artists may not want to appear in the ‘Fringe Biennial’ for fear of never ever being accepted in the ‘real’ one. A pity! Those artists who do want to participate can contact me for details at the email below. When one door is closed, many more are open.