I happened to be in Paris last Wednesday when freedom of the press was murderously assaulted at the offices of the satirical magazine Charlie Hebdo. For most of the day, I was playing tourist at the Louvre museum. I visited the Egyptian Antiquities galleries.  I also viewed some of the lavishly displayed paintings of Europe, including the Mona Lisa, which has become a fetish, cordoned off behind three layers of barriers and further protected by what I presume to be bullet-proof glass. Miss Mona seemed rather pleased with herself and all the attention.

I ended my tour with the Arts of Africa, Asia, Oceania and the Americas – all squashed into one collection. At the Louvre, Europe is clearly the centre of the world. This is understandable. What is less acceptable is the way the rest of the world is represented. In the Egyptian collection, I was struck by the following text which I’ve translated: “The Egyptian slept on a low bed, even on the floor, the head resting on a wooden support, as is still done in some countries of Africa.”

The peculiar phrase, “in some countries of Africa”, seems to imply that Egypt is not in Africa. If it were, ‘other’ would have been used instead of ‘some’. Ironically, even when a shared cultural practice across the African continent is highlighted, Egypt is sealed off. Indeed, in many museums of the Western world, Egypt is methodically cut off from the rest of Africa. Why?

The Louvre is relatively close to the offices of Charlie Hebdo. But it wasn’t until very late in the day that I heard of the attack. Insulated in the artfully constructed fictions of the museum, I had no access to ‘real’ life. At a restaurant that evening, I saw on TV the unsettling news of the carnage at Charlie Hebdo. From the safety of my hotel room, I continued to watch the drama on the BBC.

Colonisation is a france of a thing. The brothers Cherif and Said Kouachi, the perpetrators of the murderous attack, who were killed by police on Friday, were of Algerian heritage. Algeria was once a colony of France. There’s a famous Black British slogan that lucidly expresses the complex relationship between coloniser and colonised: “We are here because you were there”. The Algerian presence in France is a direct consequence of French colonisation of Algeria.

The Battle of Algiers trailer

One of the BBC reporters commented on the “flawless French” of the Kouachi brothers. In other words, they didn’t sound like foreigners. Language continues to be seen as a marker of identity. But it is sometimes quite unreliable. Despite the flawless French of the Kouachi brothers, they were unquestionably alienated from mainstream French culture. Though born in France, they had a fatal flaw. Their home culture was not French. Their religion was not Catholicism; it was Islam. And they were radical Islamists at that.

On Wednesday evening, militant mourners gathered across France to protest against the murders. The slogan that captured the national mood was this: ‘Je suis Charlie’ (I am Charlie). In this formula, the collective ‘I’ is the French nation united against an unstated, but clearly implied, “you”: those outsiders who do not share the normative values of French culture.

Furthermore, to assert that “I am Charlie” is to claim freedom of expression, particularly the cutting art of satire, as an essential constituent of French national identity. The capacity to laugh at one’s own weaknesses and that of others is at the heart of satire. Nothing – no one and no god – is sacred. In effect, failure to pass the satire test means failure to become French.

Devout Muslims who insist that Allah must not be mocked alienate themselves from their adopted homeland. They fight their god’s battles and they take no prisoners. One of the most insightful condemnations of the murders came from a representative of the Muslim community in London who was interviewed by the BBC. I’m so sorry I didn’t catch his name. He asserted that it is antiquated ideologies that need to be murdered, not journalists.

On Thursday at noon, a minute’s silence was observed in France in honour of the dead. As the bells tolled at Notre Dame cathedral, Parisiens gathered in the rain to demonstrate solidarity with the victims of the attack. The BBC interviewed some of the mourners. Chris, a perceptive young man, lamented: “The sky is falling on our heads”. This vivid image evokes the terrifying collapse of the natural order of things. 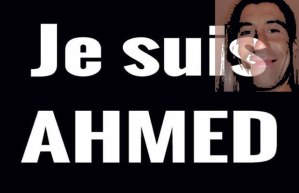 But the fall of the sky can also be seen more positively as an opportunity to rethink what we consider to be natural and normative. Can France begin to conceive the nation as fundamentally multicultural, making space for marginalised communities?  By Friday, at least 19 persons in total lost their lives before the three-day terror in France came to an end.

In response to the “I am Charlie” slogan, a new perspective emerged: “I am Ahmed”. That’s the name of one of the policemen who was murdered outside the offices of Charlie Hebdo.Yes, Ahmed was Muslim. And he upheld the laws that protect freedom of speech. Even the licence of cartoonists to make a mockery of his religion! The French Enlightenment writer Voltaire famously declared, “I do not agree with what you have to say, but I’ll defend to the death your right to say it”. That is exactly what Ahmed Merabet did. And his heroic act cannot possibly be satirised.

2 thoughts on “Death By Satire In Paris”